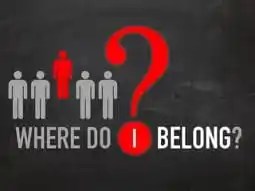 The truth is that I’ve always felt like a “middle-woman.”

OK, I’m sure you are going to need a little clarification with that word (as I just made it up now).

By saying “middle-woman” I’m trying to express a feeling of being in the middle of many categories or groups. It simultaneously produces allegiance to many communities and identities, while also creating feelings of loneliness and estrangement.

Why have I always felt like a middle-woman, you may ask?

Well… (besides the fact that I’m literally a middle child) I’ve always felt comfortable belonging to many different groups. For example, at family gatherings growing up I remember being just as enthusiastic about sitting with my aunts and grandma, cooking and gossiping, as playing football with my boy cousins and uncles outside.

In middle school I always identified as an athlete but never felt good enough to make the A team. At the same time, I always expressed my love for drawing and art class but never felt qualified enough to take more advanced courses.

Even now I find myself analyzing situations with my mom, who is more relationship-oriented and emotional, while also wanting to look at the world through my dad’s perspective, who is often more rational and laid-back.

From these examples it may seem like I constantly feel isolated in life, partially belonging to many groups while fully belonging to none. But the truth is that I’ve always loved my “middle-woman” nature. I don’t see myself as isolated but instead adaptable, open-minded and able to connect with many different types of people. A possible explanation behind my adaptability is that I grew up surrounded by various perspectives, languages and religions in various places. That is, I spent a large portion of my childhood and adolescence outside the U.S. in Germany, El Salvador and lastly Saudi Arabia, where I graduated from high school and my parents still live.

These experiences truly made me more flexible and open-minded. For example, during elementary school I was surrounded by classmates from over 40 different countries. Even more, having gone to three different high schools I experienced being the “new kid” on several occasions, constantly changing my appearance to conform to new environments.

It only seems natural then that I feel like a middle-woman at times, having dipped my toes in many communities but not fully fitting into any of them.

So as I enter into my final year at the College of Saint Benedict in St. Joseph, MN I find myself in a familiar situation. In one way, I easily fit into the majority white student body, even adapting a thick, Stearns County accent at times. Yet, I’m still drawn to my identity of being an international student (despite technically having residency in Wisconsin).

Unfortunately, reflecting on my time at CSB I know that I’ve gotten comfortable with fitting into the mold of a typical American student. I can see the ways I’ve chosen to not expand my friend group, not take particular classes or not go to certain events because it seems easier or more comfortable.

I have a strong hypothesis that we have all felt like outsiders at some point in our lives, even if we are too prideful to admit it. We’ve all occupied that middle area of different groups, categories or spaces and, to be honest, it doesn’t always feel like a positive thing.

I urge you to reflect on a moment where you’ve personally felt isolated, alone or like a “middle-person” …When was it? Who was involved? What emotions did you feel? Now I encourage you to reflect on your own actions. How might you be separating yourself from others? How might your decisions isolate other people rather than welcome them in?

I have another strong hypothesis that we can change the way we interact with others. Whether you are 4, 17, 35 or 65 years old the truth is that humans are resilient and adaptable.

I’m saying that rather than trying to conform to one group, see yourself as capable of being a part of many communities. Embrace that fact.

Or start even smaller… think of your spouse, siblings, parents, kids, friends. How are you treating them every day? How are you making them feel that they belong and are loved?

We all feel like “middle-people” at times, and maybe we should. Because instead of letting that mean we are outsiders, alone and isolated let it mean we are adaptable, open-minded and welcoming towards everyone. Brigid is the very first Unite Cloud intern and will be writing a series of blogs during Summer 2021. She grew up in Germany, El Salvador, North Dakota, and Saudi Arabia, but has always called the Minnesota/Wisconsin area her other home. Now entering into her final year at the College of Saint Benedict in St. Joseph, MN, majoring in Political Science with a Hispanic Studies minor, she hopes to pursue a career in international development. Some of her favorite pastimes include cooking, running, being outdoors, and spending time with family.