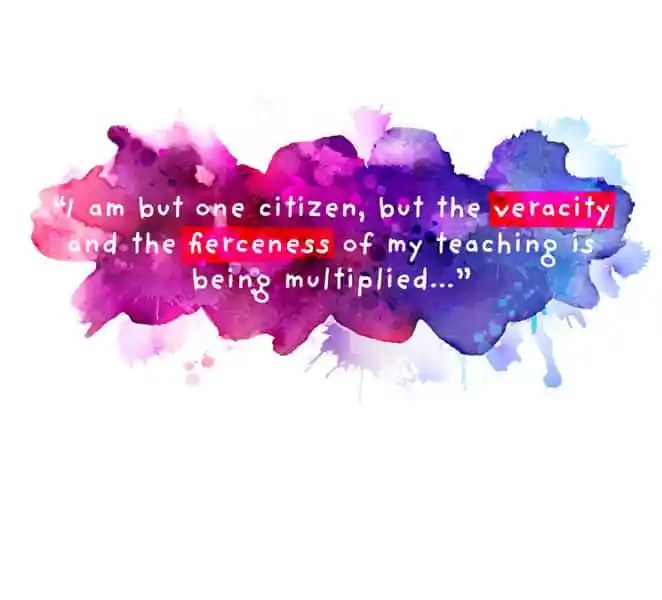 You know what? My brain hurts. I cannot begin to understand (nor do I pretend to) the actions of President Donald Trump which serve to hurt and offend people of color throughout the United States and, indeed, the world. The blatant nature of Trump’s racism runs deep and wide and he is attempting to make it stand tall so that he can usher in his order (whatever that is; I don’t really think he knows exactly) into being.

I, a small voice, scream and shout and jump up and down against him. I am appalled. I am outraged. But I am not helpless, though he would have me be. Though he would have us all be, really, if he had his way. But I, in my own manner, am not allowing him to have his way with me.

My voice, while not coming from Capitol Hill nor from Fox News, speaks loudly against his. I will not allow the rancorous, vile voice of a president who etches his senseless, racist verbiage onto our newscreens hour by hour define me or my country.

Despite Trump and his place of residence at 1600 Pennsylvania Avenue, I will stand tall in the morality that my Normandy Elementary teachers Mrs. Probasco, Mrs. Ewing, and Mrs. Pfeiffer taught me as a child when I was growing up in Ohio. They taught me that my words had value and that my voice was important. My third grade teachers, Mrs. Mack and Mrs. Stewart, let me write 20 page book reports (are you kidding?!). Mr. Fife, my middle school social studies teacher, took the time and the effort to help me understand our nation’s history so that I could understand my place in it. He taught me that I was valued when he had me and a few friends rewrite a chapter in a textbook because he knew we would learn about Ohio history if we took it on ourselves. He believed in me, and he helped me to stand tall. I thank him for that.

As I continued my journey as a student, I decided to attend college and, eventually, I went to graduate school at Ohio State University, where I obtained my teaching degree. My professors at Ohio State, like my elementary, middle, and high school teachers, continued to pour themselves into me. They challenged me to develop a philosophy of education that helped me learn to empower students to think for themselves which, in turn and over time, encouraged me to become an advocate for the high school immigrant and refugee children whom I now have the privilege to educate. I see my students for one hour each day, and I have oodles of things to teach them: short stories, novels, figurative language, essay writing. And how to argue their position in writing and in speaking.

Mr. Trump would rather that my students, 98% Muslim refugees, would not have the power to speak out. I think he would rather that I not take the time to help them to develop strong voices that will allow them to clearly communicate their own convictions as they continue to become well educated, prosperous contributors to the state of Minnesota and these United States of America. But I have news for him. My students will learn to speak out, and I hope that they will not stand down or be defeated by the powers that would have them become so.

As long as I have the opportunity to pour myself into them as an educator, I will equip them. I will value their strong and able Somali, Amharic, and Spanish speaking voices. I sincerely hope (and work daily towards this end) that the voices that I help them to refine as they learn English will equip them to speak out eloquently and forcefully to their fellow residents, students, and coworkers as they find their place as instrumental cogs in the wheel that is America. Their America.

And so, while my voice is small, the words that I spread and the hope that I work to instill in my students shall not be. I am but one citizen, but the veracity and the fierceness of my teaching is being multiplied in a small corner of Tech High School in a small town in Minnesota. I can but hope and pray that the equipping that I and my colleagues are working to do now will bear fruit as our students leave the confines of high school and head out into the big world. Donald Trump and his ilk will attempt to silence my students’ voices with racist rhetoric and policies that they would like to use to make my students cower. But Trump did not count on me and others like me who are teaching our young students to stand up for their ideals and to use their education as a weapon for good.

Still voices, begone! America, nation of immigrants, we are called to speak out in the face of bigotry as those in power seek to demean those who have every right to be here, just as many of your relatives and ancestors had when they first arrived on American shores. As Martin Luther King, Jr. emphasized in 1965: “Our lives begin to end the day that we become silent about things that matter.”

Please join me, won’t you, and end your silence? My students are still in school, finding their own voices---but you have yours. I hope that you, that we, shall not stand down. Indeed, this is our moment. We must choose to speak unabashedly and with power. Do join me, my friends. We have work to do.