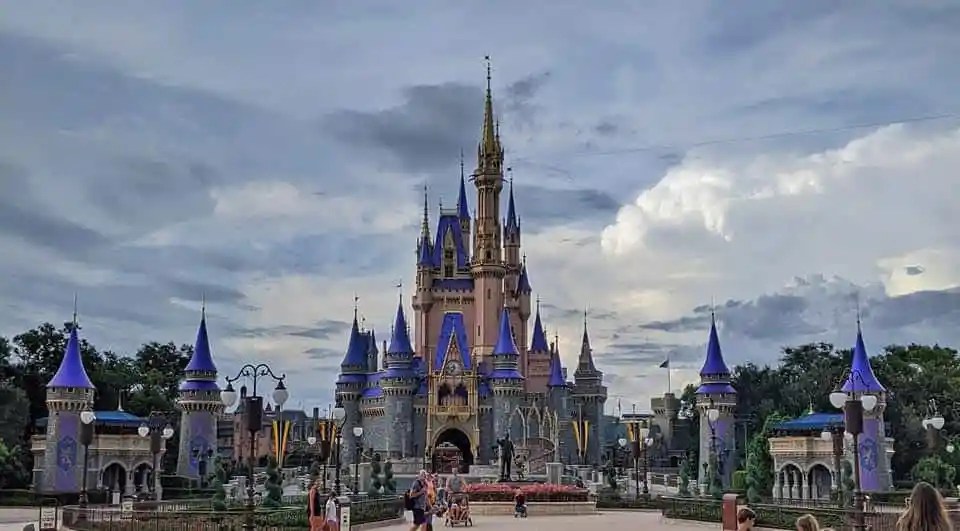 Is traveling necessary right now? Are vacations necessary? I think as I type these questions, those of you reading all have different answers. I know I did when I booked my August trip to Disney World. Even as I counted down my days, I waffled back and forth from week to week as I watched Covid numbers explode in Florida, as I watched a tropical storm aim for the Florida coast, as I fended off uncomfortable questions about why I was going and where I was going. Should I go, would it be worth it or would it a mistake that I’d have to live with?

As I rode an almost empty airplane and landed in an eerily quiet airport, it really started to hit me about how hard a place that’s built up the livelihood of its population in the tourist industry has been hit. Most of the stores and restaurant in the airport were closed and even Disney World, which was open, had limited hours, limited restaurants, limited performances, which all meant limited people were working and earning an income.

And while I was there to enjoy my vacation, restore my mental health, I wanted to get to know the heart of those living there. I felt I needed to honor them by hearing their stories and sharing their struggles. I was moved to tears, I was inspired, and I was privileged to catch a little glimpse of, dare I say it, American fortitude. I’d love to share four of those stories with you, just briefly, to honor these hard-working Americans.

First, I met Lisa, a vibrant Latina grandma, who just started driving for Uber again after 4 months off. Piled in the front passenger seat were four spray bottles of disinfectant, sanitizing wipes, spare masks. She popped her trunk from the driver’s seat and instructed me to put in my bag myself and shut the trunk. She reminded me to keep my mask on for the entire ride. I said of course! Then she shared how she only started back up because she had to bring her 7-yr-old grandson back to New York to be with his mom. She was afraid of getting sick, but she didn’t have the choice. She needed gas money and food money. Her daughter had left her son with her when she couldn’t find any work in Florida. She finally found a job in New York, after 3 months of searching. Her daughter is a physical therapist, but job hunting had been impossible in Florida. And as each person I talked to explained, the unemployment process in Florida is nearly impossible to deal with. Lisa was scared but she knew what she had to do to reunite her daughter and her grandson and was working toward that goal. Next, I met Maciej, a Polish immigrant, who was a top pastry chef at a local Orlando Resort, which hasn’t opened back up and he had no idea if it would or when it would open. He proudly told me about becoming an American Citizen, about how hard he worked to learn the food industry and now, how lucky he is to be an Uber driver. He is grateful to have the ability to provide for his family. He expressed deep sorrow for fellow immigrants who are illegal and wondering how they will feed their families. Most of their work in the service industries is gone, yet they cannot file for unemployment. His angst for them was palpable.

Then there was my server, Laura, whose restaurant finally just reopened last Wednesday. “We got a call on Friday that we’re back to work on Wednesday. That’s it. Either come back Wednesday or don’t come back, so here I am!” she said with smiling eyes. I asked how it was before that. “Oh, hard, you know. My daughter worked part-time at Hollywood Studios and she still hasn’t been called back. I had to take money out of my retirement fund just to pay bills. I paid $1200 in fees for early withdrawal and that hurts.” She also expressed concerns that her newly opened restaurant is quiet and empty, only open for breakfast and only open five days a week. “I don’t see how I will make enough working, but I am glad to be serving again. I’ve always been a server and I missed it.”

Finally, Jesse. He’s been an Uber driver for four days and got lost bringing me to the airport. I felt his discontent, his anger, his frustration punctuate the end of every sentence. Jesse was an 80’s kid like me. He joined the Navy at 17 and was a guard for President Reagan. After the military, he was an executive at Dominos Pizza. Finally, three years ago, his wife and his youngest child, moved to Florida to fulfill a dream. They opened a chain of restaurants with a friend. Jesse oversaw training and recruitment for all three restaurants. And now, he said, they’re all gone. None will open back up. They weren’t here long enough, didn’t build enough history to stand against the quarantine. “I’m a fighter,” he said. “I will succeed again.”

What could I do but listen, encourage and maybe leave a larger tip than normal? I wrote encouraging notes to all of them on their tip receipts or in the Uber App. I wanted to let them know I heard them; I appreciate them. Because despite their hardships, each of these people is an American success story. So, while I went to Disney World to escape from some of my daily tensions and rediscover my Happy Place in a whole new way, I ended up having my hope for our country restored, and that was something I never expected to happen. I was reminded, that even though all four of these people probably have different religious beliefs, different political beliefs, different social structures, they are all united as Americans, fighting to do the best they can for themselves, their family and their community.