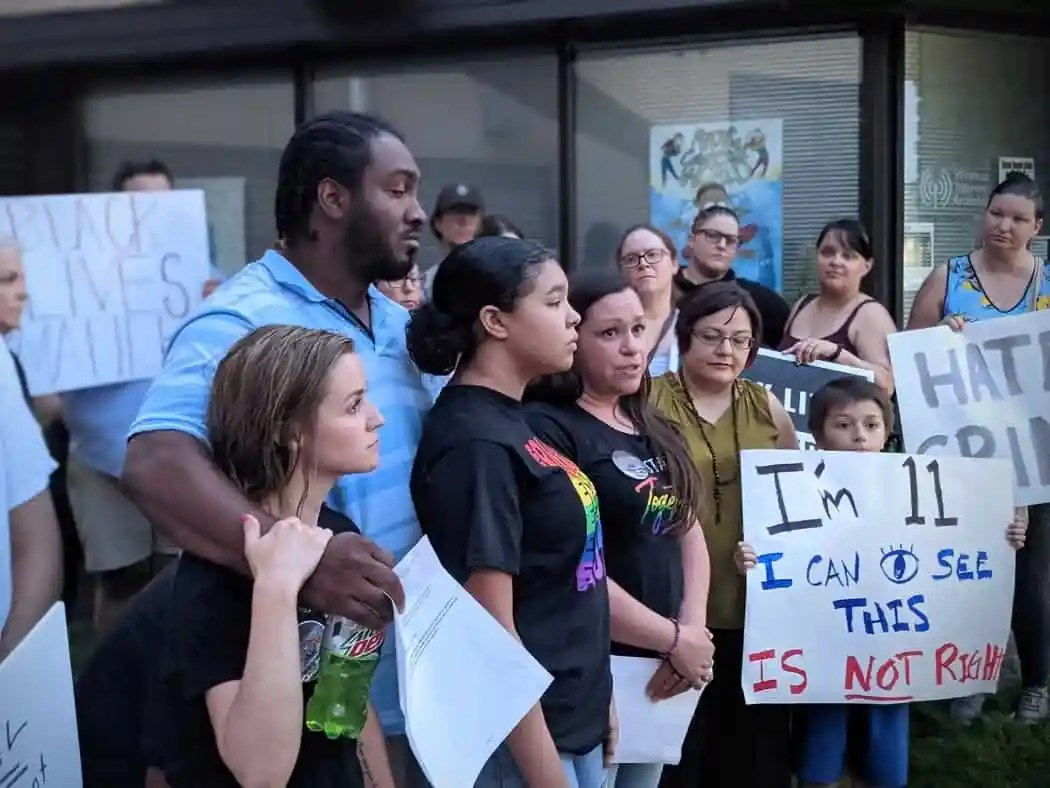 On Tuesday, July 26 I drove to Cold Spring to show support to the Robinson family and those in the Cold Spring area who are tired of the racism they experience in the community. After dozens of emotional testimonies, the five members of the Cold Spring City Council were clearly appalled to learn about what was happening in their community.

But there was one string of comments from the council members that really stuck with me. If I understood correctly, none of the five members of the council (all white) had any idea that the Robinson family was living in terror for weeks. At least a couple of the council members also stated that they did not know about racist acts and racism in their “community.” I say this not to criticize the council members. Personally, I was pleasantly surprised at their reaction on the issue, and their willingness to be vulnerable, to share their lack of knowledge on the fraught race relations in their town. I am mentioning this because this is the perfect picture of well-meaning people having no idea how “others,” those who do not look like them, live in their own community. I am hopeful that this was a wakeup call for those elected officials, and that they can be more responsive than the School Board and the Superintendent have been throughout this whole ordeal.

This lack of understanding may be shocking to some, but it is not surprising to me. We live in bubbles, and these bubbles tend to be even more impenetrable for people of color in small towns. I lived in majority white (like 90% or more) small towns in Iowa and in Kansas, and I spent some summers in two different small towns in North Carolina. Even though there is a lot of class privilege that comes from being a college professor, I stuck out like a six-foot-nine brown sore thumb in these communities. I never felt threatened in these communities, but I also never felt fully safe. More importantly, when something racially motivated happened and I tried to share it with my white friends, they would reject my point of view and dismiss me as  overthinking  it. They never experienced dirty looks, or slurs being hurled at them as someone drove by, and they could not believe these ugly things could happen in “their community.”

This inability to believe what others are saying, this (intentional or unintentional) racial gaslighting comes oftentimes not out of malice but from a complete lack of historical understanding of what it means to be non-white in White America. This year two important historical moments in Black History entered the mainstream (white) zeitgeist: The 100-year anniversary of the Greenwood Massacre in Tulsa and the establishment of Juneteenth as a national holiday. To many people it seemed like these two events, and especially the national holiday, came out of nowhere. This is because our “communities” are more interested in venerating flawed white historical figures as if they are deities and ignore the realities of race relations in the United States and their own communities.

I moved to the United States in 2000 to attend college, and I vaguely remember hearing about Juneteenth from some African American friends I had in college who were from Texas, but I didn’t really understand the significance of the event until moving to Saint Cloud three years ago and learning more about it after a Juneteenth celebration at Lake George.

I asked a few of my white friends, some in their 30s and 40s, some in their 60s and 70s, when they first heard about Juneteenth. The overwhelming majority of them had never heard about it until it became a holiday. A friend of mine (also white) who has a PhD in African American history did not learn about Juneteenth until after their doctorate. Meanwhile, a few African American friends I asked shared that they learned about Juneteenth either sometime in middle school or high school, not in class but at home.

I think I vaguely remember hearing about the Tulsa Massacre in college too, not in class but probably from one of my African American friends from Oklahoma. I also vaguely remember some hip-hop lyrics alluding to Black Wall Street. It wasn’t until 20 years after college that I decided to read up on the massacre while I watched the Watchmen series that centers on the real events of the Tulsa Massacre but in an alternative comic book universe.

I asked some of my white friends when they first heard about the Tulsa Massacre and the pattern was the same: some have never heard of it until I asked, some heard about it this year because it has been in the news, some learned about it later in life, none of them learned it in school, much like many Oklahomans. I asked a friend of mine who grew up in a suburb 15 minutes from Tulsa, and she said that the first time she heard about it was when she was in her 20s, and her mom, who lived her whole life in the Tulsa area, did not learn about it until she was in her 50s. I asked my African American friends and the same pattern also emerged, they learned from their parents or grandparents in middle school or high school.

So, when the five council members  from Cold Spring say they are surprised about the racist vitriol in their community, I believe them. United States history is replete with examples of oppression against black bodies that society has collectively chosen to ignore or have never mattered because it was not part of the narrative some in the country like to push about our past and present.

I hope that what happened to the Robinsons can serve as a wake-up call to all of those in Cold Spring who still believe their community is welcoming to everyone. I hope the terror they have lived will not be forgotten by those who have the privilege of moving on with their lives without the emotional scars of racial trauma. I hope what happened in Cold Spring is the catalyst for real change in the community, that it is not forgotten out of convenience to fit the narrative created by those who ignore the ugly scars of our country and our communities.